My Student In Need Nearly Doubles In Size Across Montana

Over summer break, My Student In Need nearly doubled in size.

At the end of June, 70 schools statewide participated in the nonprofit. Two months later, there are 130 schools participating, and My Student In Need executive director Kim Wombolt is being called to speak on the national level.

Since September 2013, My Student In Need has served as an intermediary between need requests and anonymous donors. It was born of My Neighbor In Need, founded in Great Falls by Dave Snuggs, a way for people to “ask for help with dignity,” Wombolt said.

“Nothing really seemed to be moving,” Wombolt said of My Student’s growth.

My Student in Need Receives $20,000 Grant From The Alice Lee Lund Trust!

“Dime a Day” Fundraiser Underway for My Neighbor in Need 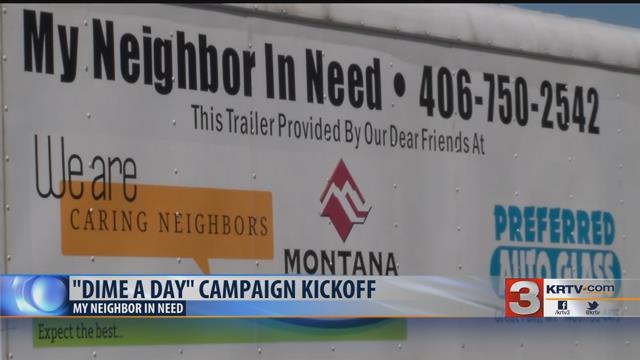 My Neighbor In Need kicked off its ‘Dime A Day’ campaign in Great Falls on Monday.

They are asking for donations to help fund their free deliveries and pay for operating costs.

Organizers say they are sending out a mailer this week with more information about the fundraiser.

“We have a wonderful community here in Great Falls and we have grown tremendously over the last three years and that’s through all the support of this community,” said My Neighbor In Need director Kim Wombolt.

The Dime a Day campaign will continue until July 13th.

You can donate on the My Neighbor in Need website, in person at their office in Times Square building, or through the mail by sending your donation to 525 Central Ave #M2, Great Falls, MT, 59401.

Find the rest of the news story online here:

My Neighbor in Need fulfilled its 1st need on March 21, 2012. After 4 years, we have, through the generosity of our community fulfilled over 6,600 Neighbor in Need requests and over 1,400 Student in Need Requests. Founder, Dave Snuggs originally hoped to fulfill about 200 need requests per year. Please watch our anniversary slide show and celebrate with us as we celebrate our 4th year anniversary.

My Student in Need Introduces New Logo and Revised Website

Great Falls, MT: My Student in Need, a division of My Neighbor in Need, a 501c3, non-profit organization announced that it has created a new logo and has revised and launched it new website.

“Updating the My Student in Need website and logo to partner with the My Neighbor in Need website, positions the organization to meet continuing requests for service,” said Kim Wombolt, Executive Director.

As of the 2015, Christmas Break, My Student in Need was operating in 72 schools and had completed 1,325 need fulfillments since it launched on September 17, 2013.

My Student in Need is the creation of Great Falls resident, Dave Snuggs, and through a partnership with numerous school districts throughout Montana, allows for selected School Teacher/Administrators to submit a request for help with a specific need, such as school supplies, clothing, lunch money, etc. for their Students in Need, all set in an anonymous format.

The logo and the revised website was created by 406 Marketing & Design, the same company that recently revised the www.myneighborinneed.org website. “When the idea of having My Student In Need re-designed came up we were thrilled to be able to contribute. The heart, vision, and people behind My Student In Need is absolutely amazing and we just feel blessed to be a part of it. Our hope is that this redesigned website that reflects the heart of their cause will help My Student In Need reach the next level and impact the lives of even more students,” said Josh Dardis, Owner, 406 Marketing & Design.

www.mystudentinneed.org is available for free to any school wishing to help their Students in Need.

We have come to expect generosity at Christmas time. Whether it be gifts under the Christmas tree, or a substantial check written to the charity of your choice, the act of giving has come to define the spirit of the season.

Yet random acts of generosity from a complete stranger – that’s a rarer and more surprising Christmas commodity.

Accompanied by a small group of elves, an anonymous Santa distributed good cheer to unsuspecting Great Falls shoppers Wednesday morning. The gifts were not life changing: a rush-hour breakfast sandwich, a few gallons of gas, a couple bags of groceries. But they were all that was needed to spread an honest spirit of good among those lucky few fortunate to receive the gifts.

The team at DaVita Great Falls Dialysis, as part of its “DaVita Way of Giving” campaign, presented a check for $2,000 to My Neighbor In Need on Monday.

The DaVita Way Of Giving program is designed to help communities in a way that sends ripples of their service, leadership, and care.

My Neighbor In Need suffered a setback with a small fire in its Times Square headquarters recently, and Davita decided to step in and help financially.

A small fire and subsequent sprinkler drenching inside the Times Square building caused some damage, but hasn’t dampened spirits for the nonprofit organizations housed in the facility.

In fact, My Neighbor in Need, a nonprofit organization that uses the Internet to connect donors with people in need of everyday goods, announced Tuesday — a week after a small fire was started in its store by a candle — that the organization has now filled its 6,000th wish.

“This has been an interesting week on karma’s roller coaster,” said Dave Snuggs, founder and board president of My Neighbor in Need. “Today we’re back on the upside — the joy side.”

Robbyn Mays, her husband and their two small children moved here from Washington a few months ago because her husband found work as a welder. While they tried to save up enough money to afford an apartment, they lived in a tent at Dick’s RV Park. When the tent was destroyed and some of their belongings were soaked due to inclement weather, they moved into different motels until they found an apartment. St. Vincent de Paul worked to get the family clothed, but referred Mays and her husband to My Neighbor in Need for furniture.

GREAT FALLS -My Neighbor in Need may have suffered a setback after a small fire caused water damage at their store, but that didn’t stop them from helping their 6,000th customer.

My Neighbor in Need helped Robbyn Mayz and her family who recently moved from Washington to the Electric City. When the family needed to start over they found the organization and now they will be able to sleep on a bed for the holiday season.

Coat drive for Student in Need underway in Great Falls

Last year’s Community Coat Drive collected more than 600 winter coats for kids in need when organizer Cyndi Baker said she was only hoping for 200.

Baker and other businesses are partnering with My Neighbor in Need’s Student in Need program once again not just to provide coats, but other winter goods like boots, hats, gloves and snowpants in all sizes to outfit kids and keep them warm this winter.